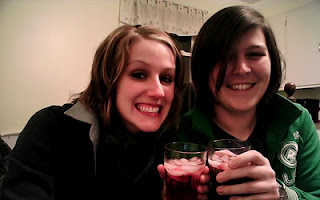 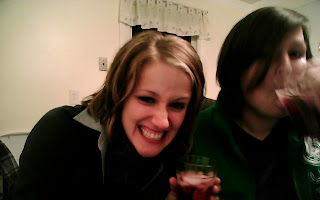 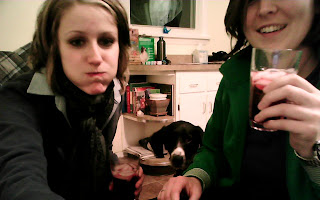 Visiting my dear friend Bec in Pittsburgh for a few days.  We may go to one of the various Carnegie museums.  What a philanthropist, gave the majority of his money away for the building of libraries, museums and universities, all of which his workers probably never stepped foot in. woohoo.  I <3
museums though! Bec made us a drink she calls a vodka chronic.  Tonic water, cranberry juice, vodka and some cucumber slices for some additional funzy coolness.  That's probably already a drink, maybe a cosmo or something, but I dig the name she gave it. Her dog's name is Mobi, not to be confused with the whale or the famous techno musician, hence the "i" instead of the "y". Much like his owner should not be confused with the famous scientologist composer of the fabulous song "Loser" and many others. She also has this awesome cat named James after James Bond because he's a psycho killer, I think she should've just gone with "David Byrne" Que'st que c'est? James' name was originally Thorsten, but her dude friends kept calling him foreskin and she got tired of it. haha.
Posted by Emily Story at 4:27 PM