I drove to Lynchburg, Virginia on Friday
For my grandfather's second funeral.
Which half of him?
I'm not sure.
I just know I slept next to one half of him last night.
His ashes that is.
The urn traveled to Lynchburg from Georgia on my grandmother's lap
In a target shopping bag.

I slept on the sofa in my Uncle's man den.
The bag was placed by that couch on a coffee table.
Should've smoked a cigar by it and had a bloody mary
or eaten some banana pancakes.
In the name of George Cross
The man that drove the famous writer Walker Percy to his doctor appointments
as he was dying of cancer
The man that checked my twiggies, aka rubbed my shoulders
the man that sat me on his lap for 22 years,
and not in a pervy way
The man that shot armadillos with a rifle in his gigantic garden
in Southern Louisiana
and had a heart of gold
A graduate of a military school
who served in World War II
and said "Meow" at Southern eatin' joints as waitors served him his favorite meal,
Cafish.
The man who's first and deeply beloved wife fell asleep one night
on her 41st year of life
and never awoke again
The man who married my grandmother,
an early widow.
And called her Miss Daisy
And yelled out her name even with the dementia deeply set in
if she left the room for too long
Because he needed her
Her presence was a comfort for him
And to a granddaughter observing this need,
it was understood to be deep, authentic, true love.
The man who had to move away from cajun culture
Because of Katrina
And didn't last many years after.
Maybe he was just old,
but I also think he had a broken heart
yearning for his home.

He had long ago become like a father to my father
and 100% a grandfather to me.
I miss him.
so much.

(that wasn't really supposed to be a poem, but I was crying the entire I wrote it, so I got a little minimalisitic with the description. My apologies, if the above words seem like a really suckie attempt at poetry...I'm just sad.)


I love family time more than anything in the world I've decided. This picture of my mom truly illustrates the lovely time we've had this weekend celebrating the life of a wonderful human being.
She's showing off a trout head on a fork at a fancy restaurant. My mom has class.  ha. I love her. She's a hoot.
Thanks for the picture Seester! 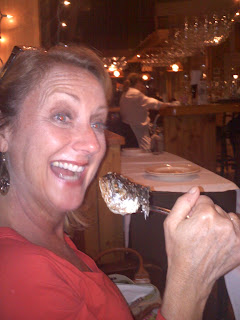