Thoughts on my jaded cowardice and the American Dream. 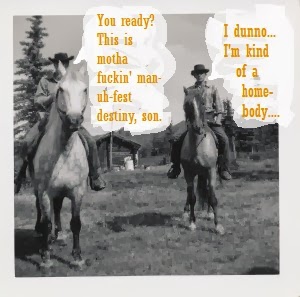 So I've been thinking a lot about the American identity lately. How we don't really have one, so we've sort of invented one, or I guess unconsciously assumed one. What I've observed that Americans seem to have in common, or at least what seems to be a theme in the mass conceptualization of "the American", is a strive for success whatever the cost, and an extreme anxiety/ paranoia about pretty much everything. I realize I'm not exactly saying anything new here, everyone knows Americans are obsessed with the green and scared shitless of germs, terrorists and the basic uncertainty inherent in everything. We feel that our roots are in quicksand and we either obsessively move forward and far away or get stuck mentally, physically and emotionally in whatever our situations are/have been.

I've felt pretty damn stuck for a while and have blamed it on an array of things such as the economy, my antiquated skill-set and my apathy/ distaste for the way the world is. I've always rebelled against conformity to the bullshit by essentially doing not much of anything, but lately I've just felt like I need to suck it up and make some freakin' money and be able to pay rent AND go out to dinner sometimes. That's what we call maturity here in America. Taking the plunge. I'm selling out, ya'll.

A friend of mine who is in her fifties recently said to me "You're too young to be so cynical." She's probably right.
Posted by Emily Story at 10:50 AM