Bottomless Mug and an Empty Heart. 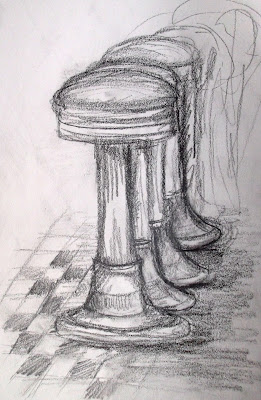 “Are you okay, hun?” asked the cute, but crooked-teethed waitress with a heavy country twang.
I’d been totally lost in my own empty, thoughtless thoughts.
“Huh?” I asked. My heart pounded in embarrassment, while my brain languidly caught up with it.
“You doing alright, sir? Need more coffee?” she asked, speaking significantly louder this time.
I didn’t know which question to answer. My mug was close to empty, but she’d just filled it up not long before. The mugs were small.

Was I alright? Who knew, but it’s always best to say yes.  If I’d responded simply with “yes” though, she may have thought I needed more coffee and that I was also doing fine. Both of which I was still unsure of.
I perked up a little dramatically and decided to answer with “I’m great thanks”.  I complemented this response with an unconvincing smile so big that the crowns on my back molars were revealed and all my years of wear and tear were probably exemplified along the hills and crevices of my wrinkled, ugly face.
I was sitting on a stool at the counter right in front of the cash register.  It’d been the only seat available the last time I’d come there, so I took the same seat again, despite the many other more comfortable options available.
I added to the waitress that I was getting some work done on my Cadillac at the mechanics next door and would probably be hanging around for a little while. Why the hell didn’t I just say car? Who cares if I have a Cadillac, she certainly didn’t. But she was awfully sweet.
She responded, “Oh that’s just fine. Take your time, Baby.”
I would have to take my time if we were in bed together. I’m that goddamn old. I’d be a disappointment at best.
I held the newspaper up high in front of my face only to read the same four words over and over again. I can’t remember them now, nor could I have told you what they were then. I never really read them, I only sort of half-consciously counted them.  It was four words, I know that for certain.
My waitress and one other girl came over to the cash register. Mine was helping the other type in an order, I guess she was training. That made me feel depressed. What a terribly sad place to be in training. They gossiped about some customer being way too high maintenance for a crappy old diner, adding in a racist slur about black people not tipping good.  They seemed to feel completely comfortable saying these things right in front of me.  Maybe they didn’t even notice me. Then I remembered how my waitress had spoken up when I said “huh?” earlier.  I guess they thought I was close to deaf, and probably dumb too.
The other girl walked away after a few minutes and my waitress took a step towards the counter and therefore very close to my newspaper. I put it down and she asked me once again and loudly,
“You still alright, sweetie-pie?”
It was odd to me that she used these pet names.  She couldn’t have even been twenty-one.  I was out of the loop, but it just didn’t seem fitting to her age for her to use those sorts of epithets. However, I kind of liked the attention, even though she clearly just saw me as a nice old man, or worse, she just used those pet names for everyone. Once again I had to tell her how I was doing. It was so nerve-racking. And to her it was probably almost a rhetorical question, a robotic inquiry, to which the answer only mattered if a guest requested something, and even then it didn't
matter all that much.
I felt myself break a sweat. I wanted to tell that pretty, young, stupid girl that I had a dirty secret weighing down on me.  That I wanted to let her in on it.  That I wanted her to be the saint that saved me from my own dirty conscience. I wanted to tell her that I’d killed a man and gotten away with it.  I wanted her to comfort me and tell me it was okay, but at the same time I still wished to feel the remnants of the rush one gets when he steals the life of another.  I wanted that sexy little waitress to be my angel, to tell me I could still find redemption.
Problem is I’d never killed a man and I never would’ve, and I never will.
“I’m still okay, thanks.” I responded after an awkward silence which she was on the brinks of ending by asking me the question again. Fortunately I got around to answering before she did this. It would have killed me inside I think.
I sat there shivering in the heat my body produced with those sick thoughts.  My brain is getting weak. It’s the worst feeling in the world to know that. I’m going to die soon. I’ll probably live another decade, dead.
I got up rashly to get my wallet out of my back pocket so that I could pay and get the hell out of there. When I was on my feet I almost immediately fell over in a dizzy spell and all the young, cute waitresses gathered ‘round me. What felt like a hundred country accents asked me if I was okay. I couldn’t take being asked that anymore. I shoved them all away and rushed out of the building.  I didn’t pay. I didn’t even tip. But they didn’t come after me. I was only going next door to pick up my Cadillac, and they didn’t follow. They let me go. And surely not a soul cared. But they were good, country girls. Maybe they cared a little, for a moment or two, that a sad, lonely old man fell on his ass.
Posted by Emily Story at 11:04 AM